Madagali lies some 276 kilometres from the Adamawa State capital, Yola.

The town, which is close to neighbouring Borno State, was one of several others held by Boko Haram at the height of the group’s brutal insurgency.

The latest blast is the third in Madagali, following attacks by two female suicide bombers on December 28, 2015, at a busy motor park.

The spokesman of the 28th Task Force Battalion of the Nigerian Army, Badere Akintoye, said the two teen female suicide bombers sneaked into the busy market and detonated themselves in the middle of it. 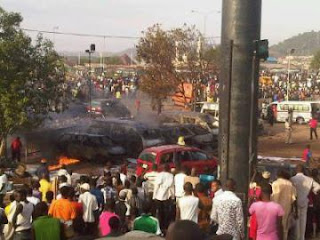 “For now 30 were confirmed dead and (an)other 67 injured and have been evacuated to Michika hospital,” the army major said.

Mr. Muhammad called on the federal government to deploy soldiers to the surrounding areas where he said Boko Haram insurgents had set up camps.

The Federal Government has reduced the pump price of Premium Motor Spirit aka petrol to N121.50 per litre.
Read more
NEWS

Despite the high rate of unemployment in Nigeria, the country’s minister of labour, Festus Keyamo said the President Muhammadu Buhari administration, in the last five years has done well in job creation.
Read more
NEWS

The management of the University of Benin (UNIBEN) has reacted to the alleged r.a.p.e of one of its students, Vera Uwaila Omozuwa.
Read more

We will be looking at two beautiful sisters that will easily qualify for twins despite not being one.
Read more
NEWS

China warns US against sparking a “new cold war”

There has been a strong disagreement between US and China regarding the global pandemic and launching of 5g network.
Read more
NEWS

Romina Ashrafi was killed with a farming sickle after fleeing her family home with a 34-year-old man after her father expressed outrage at their plans to get married.
Read more
ENTERTAINMENT

As a result of Buhari’s loan, Nigeria is now on the auction market — PDP

The major opposition party has ridiculed the continuous foreign loan policies of president Buhari and his Political party in driving the Nigerian economy.
Read more
NEWS

Airports in Nigeria will soon reopen for activities as government tries to address economic issues in the sector.
Read more
SPORTS

The young star with African Asian ancestry has made a new world record has the highest paid female athlete in the world.
Read more
GIST

Lagos State to recruit 2000 teachers after the pandemic

Cobhams Asuquo gets an appointment from UN

Good news for the legendary producer and song writer as he bags an ambassador position in UNICEF....
Read more
Load more

Moyo Lawal is famous Nolllywood actress that was born in Badagry town in Lagos State. She holds a degree in Creative Arts from
Read more