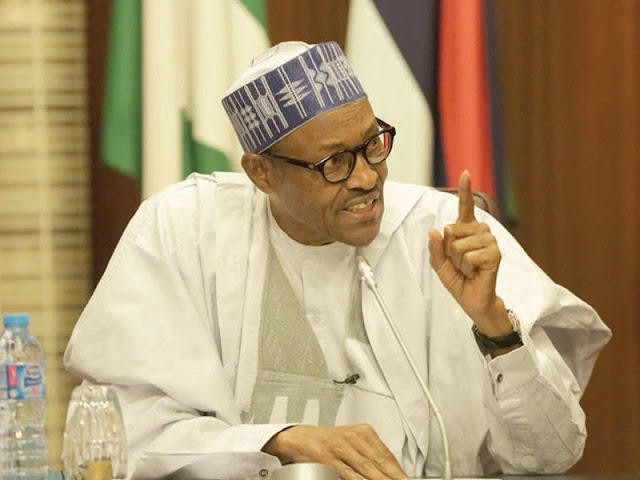 President Mohammadu Buhari commends the Nigerian Army troops for  taking over Boko haram base located at Sambisa forest, The news came as a heart-warming  message from the President

The entire 1300 square kilometre forest fell into the   hands of the soldiers at about 1.35pm on Thursday, according to
Buhari in what he himself called “the long-awaited and most gratifying news.”

He said he was delighted at the news and “most proud of the gallant troops,” which made it all possible.

He particularly acknowledged “the determination, courage and resilience of troops of Operation Lafiya Dole at finally entering and crushing the remnants of the Boko Haram insurgents at ‘Camp Zero’, which is located deep within the heart of Sambisa Forest.”

He was briefed on the development by the Chief of Army Staff, Lieutenant General Tukur Buratai.

Buhari confirmed that that the terrorists “are on the run, and no longer have a place to hide.”

His message: “I am delighted at, and most proud of the gallant troops of the Nigerian Army, on receipt of the long-awaited and most gratifying news of the final crushing of Boko Haram terrorists in their last enclave in Sambisa Forest.

“I want to use this opportunity to commend the determination, courage and resilience of troops of Operation Lafiya Dole at finally entering and crushing the remnants of the Boko Haram insurgents at “Camp Zero”, which is located deep within the heart of Sambisa Forest.

“I was told by the Chief of Army Staff that the Camp fell at about 1:35pm on Friday, December 22, and that the terrorists are on the run, and no longer have a place to hide.  I urge you to maintain the tempo by pursuing them and bringing them to justice.

“I, therefore, call on all Nigerians to cooperate and support the Nigerian Armed Forces and other security agencies by providing useful information that will expose all the terrorists hiding among the populace.

“Further efforts should be intensified to locate and free our remaining Chibok girls still in captivity. May God be with them.

“I also want to congratulate and commend the able leadership of the Nigerian Army in particular and indeed, that of the Armed Forces in general, for making this possible. This, no doubt, will go a long way in improving the security situation not only in the North East, but the country in general.  But we must not let our guards down.

“Once more, congratulations to our troops and all who, in one way or the other, contributed to this most commendable and momentous effort. May the Almighty continue to be with you.

“I wish you a Merry Christmas and a most rewarding and peaceful Year 2017 ahead.”

Buratai separately lauded the efforts and sacrifices of “gallant officers and men of the Nigerian Army currently engaged in the counter insurgency operations in the North East and other operations across the country and abroad.”

He gave the commendation in a Christmas and New Year message to the personnel.

He congratulated them for their “bravery, doggedness and loyalty in these endeavours,” and urged them to “maintain the momentum and remain steadfast as we continue to professionally and responsively carryout our constitutional roles.”

He pledged to continue to “ensure that troops’ welfare and that of their families, remains my utmost priority.”

He also assured them of “Federal Government’s commitment to providing the Nigerian Army with the requisite support for us to perform our duties.

“The President, Commander-in-Chief of the Armed Forces, President Muhammadu Buhari, has pledged his total support to the Armed Forces to bring all ongoing operations to an end in favour of our dear country.

“This festive season heralds peace as well as a time for merriment, sober reflection and introspection. I enjoin us all to continue to pray to the Almighty God for the repose of the souls of our fallen comrades and the wellbeing of the families of our brave fallen heroes,” the army said.

While thanking the officers and men for the good job they had done in 2016, he said they should look forward to “making greater progress in 2017.”

He wished them all a Merry Christmas and a Happy New Year.

However, the ouster of the insurgents from Sambisa does not necessarily translate into an end to other forms of terrorism by the extremists.

These include suicide bombings, and assaults on villages, gatherings and military locations in the Northeast.

The Sambisa Forest which Gen. Buratai last March said is  about the size of Enugu State had served Boko Haram in various ways including its operational base, training camps, and hideout for its leaders, foot soldiers and their families.

Most of the over 200 Chibok school girls that were abducted in April 2014 are believed to have been kept in the forest for some time before few were released.

Previous articleDiaspora Nigerians remitted $35b home in 2016, highest in Africa, 3rd highest in the world
Next articleSEASON’S GREETINGS!!

The 71-year President was caught on-camera swimming over to the kayakers who were struggling in the water.
Read more
NEWS

Although the details of their discussions were yet to be disclosed, sources suggested it was all about the ongoing mediation in the political crisis in Mali.
Read more
NEWS

The Minister of Aviation, Hadi Sirika, has revealed that international flights will resume on August 29, 2020.
Read more

Health is wealth!  And you don't have to be a doctor to know basic health details especially when it comes your body.  Most of us don’t give much thought to our pee before we flush it down. But ....
Read more
ENTERTAINMENT

KimKardashian may be slowly losing her reign as the queen of instagram as over 100,000 fans unfollowed her following the release of her unairbrushed...
Read more
ENTERTAINMENT

The socialite made it clear inirder to end the controversy and arguments surrounding the true nature of her boob's.
Read more
ENTERTAINMENT

Lots of people focus on sex as a means of procreation and the negative implications it comes with. Sex is not only pleasurable,did u know it is also
Read more
ENTERTAINMENT

Cardi B shows off her new butt and back butterfly tattoo

The mother of one shared pictures of her new tattoo on instagram with videos and pictures.
Read more
GIST

Enugu born Nollywood actress and graduate of University of Nigeria Nsukka, is setting the internet ablaze with her curvy body. Nigerians are
Read more
ENTERTAINMENT

A Playboy model who earns a whopping £800,000 a year from selling raunchy pictures has shared quite the treat on Instagram.
Read more
ENTERTAINMENT

If u missed the Saturday night party, worry no more as some good collections of last night event won't make you miss anything.
Read more
Load more