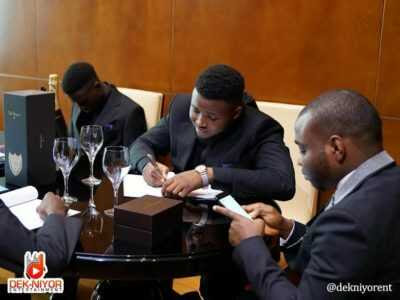 The energy filled rapper who took up the challenge to loose 15kg in a month was accompanied by his team and Cinematographer Walinteen Pro, now his label mate to Dubai to claim his weight loss challenge pay cheque of N1million, but instead got a surprise record deal with the Dubai based record label “Dek-Niyor Entertainment “.

The record deal announced the birth of quality content which is to be churned out of the cabal of the artiste Chinko Ekun and label mate Walinteen Pro.
“As we look into the enjoyable future with a foreseeable great experience, Dek-Niyor Entertainment uses this medium to congratulate Chinko Ekun and Walinteen Pro on synching into the bright side of the future.”
Previous articleKarrueche Files Restraining Order Against Chris Brown After Allegedly Death Threats
Next articleI Started Singing Reggae Songs Because Of Girls- Patoranking