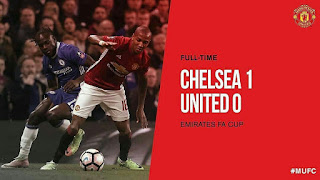 Manchester United were defeated in their FA Cup encounter with league leaders, as Chelsea eliminated them from the competition with a 1-0 victory.

After a foul by Man. United player, Herrera on Eden Hazard
which resulted to him receiving a second yellow just in the first half of the match. United fans could just feel the title out of their reach.

An outside the box strike from Kante was enough to end 10-man United’s race in the competition as the match ended 1-0 to Chelsea’s favor.

Previous articleStriker Crisis At Manchester United As Rooney, Rashford, Martial And Ibrahimovic Out For Chelsea Clash
Next articleComedian Mr Jollof Decides to Give Out 100k Gift He Got From Hushpuppi To An Ice Cream Seller