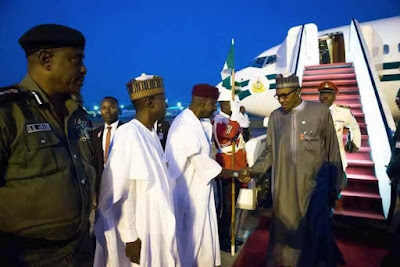 President Muhammadu Buhari arrived the country Friday at about 4 a.m., 51 days after he left the country on a medical vacation.

Owing to the closure of the Abuja airport, presidency sources informed
THISDAY that his plane was scheduled to land at the Kaduna airport in the early hours of Friday, following which he was to be flown by helicopter to the President Villa, Abuja.
The sources also revealed that the president might address the nation Friday after his long absence, in order to quell any concerns over his capacity to govern.
The news of his return Friday was broken last night in a statement by his media aide, Mr. Femi Adesina.
Adesina recalled that the president left the shores of the country on January 19 for a vacation, during which he was scheduled to undergo routine medical check-ups.
He said the scheduled vacation was however extended due to the advice by his doctors that he undergoes further medical tests.
According to him, the president expressed gratitude to the generality of Nigerians in all parts of the country and beyond who supported him in their prayers and good wishes while he was away.
“President Muhammadu Buhari is expected to return to the country tomorrow, Friday March 10, 2017. The President left the country on January 19, 2017 for a vacation, during which he had routine medical check-ups.
Source; Thisday
Previous articleTonto Dikeh Breaks Down In Interview, Accuses Rosy Meurer Of Breaking Up Her Marriage
Next articleNYSC Member Who BRagged About Sleeping With An Under Age Girl And Giving Alcohol To School Boys Has Been Arrested