World’s most expensive Burger sells for N4.5 million in Dubai 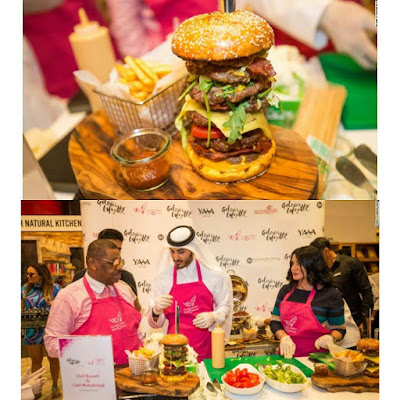 The world’s most expensive burger has been sold at auction to raise money for a cancer charity.The $10000 Burgerstack was sold during the Pink Caravan’s Pink Bite breast cancer charity event, which raised
Dh108,755 in total for the cause.

The auction took place at Galeries Lafayette, Le Gourmet in Dubai Mall with a host of the country’s government officials and public figures taking part. “I have been an ambassador of Pink Caravan since the very beginning and I am extremely honoured to be here today,” said Sheikh Mohammed bin Abdullah Al Thani, chairman of the Department of Statistics and Community Development.

“Two years ago we broke the world record by selling one burger for US$7,000 (Dh25,700), and this year we wanted to top that. “Of course, all proceeds will go to breast cancer awareness and free detection at an earlier stage.” The event brought together seven of emirate’s top chefs and Pink Caravan ambassadors who collectively created innovative, pink-themed dishes at their live stations inspired by Emirati cuisine.